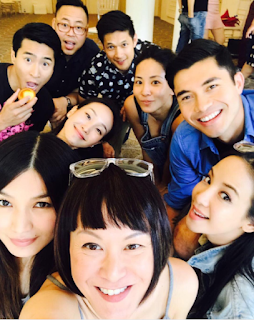 
I saw Crazy Rich Asians in a theater today, and I had so many feels!

What did I feel when I watched this movie? 🤔


01. Me during the wedding sequence of Crazy Rich Asians: 😢

03. Needed more Harry Shum Jr. He is top billed in the end credits, but he doesn't even have any lines! (Most of his scenes were cut.)

07. Gemma Chan was bringing it in her scenes. She's definitely human.

08. After seeing Constance Wu portray an Economics professor, I want to revisit my interest in game theory that I had developed in business school. #RepresentationMatters

10. The weaving of comedy throughout the film was unexpected and masterful. I love to laugh.

11. So many women in this movie! The inaccurate narrative about Crazy Rich Asians is that it's the first Hollywood movie starring an all Asian(-American) cast in the past 25 years since The Joy Luck Club.
It's not.
Better Luck Tomorrow and The Namesake would beg to differ.
Also, I can't be the only person who has seen both Saving Face and The People I've Slept With.
Anyhoodle, no focus has been placed on the proportion of female characters in Crazy Rich Asians, which is significant! Most of the characters are women. If most of the male characters were excised from the film, no one would notice. Nick's father never even makes an appearance!

12. Speaking of lady business, the trailer for Second Act, starring Jennifer Lopez and Leah Remini aired before Crazy Rich Asians, and now I will be seeing this movie. I 💗 that Leah and J.Lo are friends in real life, too.
And when Vanessa Hudgens told Jennifer, "I really admire you. You're kinda who I want to be when I grow up," I screamed (in my head), "You are, Vanessa! You're the next J.Lo, and she made that possible for you!" 😭
#RepresentationMatters

13. A Star is Born is not the film anyone needs right now, no matter how much Bradley Cooper wants Reese Witherspoon's Walk the Line Oscar.

14. Questions I have about Little Italy:
a. How is this a major motion picture, and not a straight-to-Hallmark Channel movie?
b. Hayden Christensen is actually Canadian and actually of Italian descent. But Emma Roberts? Not so much.
c. Alyssa Milano is third billed actor, and she's barely in the trailer.
d. Emma Roberts and Hayden Christensen are 10 years apart in age. Were there no Italian-looking actresses Hayden's age available? Conversely, and more likely, were there no Italian-looking actors Emma's age available?
In real life, ten years isn't a big deal between consenting adults. But in Hollywood, it's a disgusting double standard that needs to end.
For example, Constance Wu and Henry Golding are five years apart.
The other way.
Thank you, Crazy Rich Asians.

Fellow Nerdy Girls, what movies are you excited about?