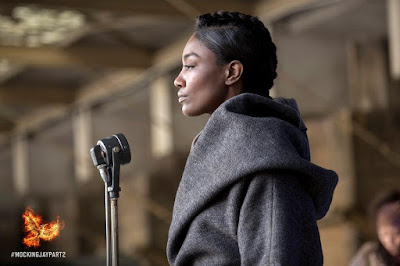 (Retroactive) solution: Target the underserved markets that were represented in the film.


How could the Power of Diversity translate into a bigger box office for The Hunger Games: Mockingjay Part 2?

Here is a SWOT analysis of the film, followed by four concrete ways to get more butts in seats:

1. Announce that North America will have its first black woman President. And explain how she gets her perm done in post-apocalyptic Panem.

This is a female-driven franchise. But "white women" does not equal "all women." Not by a long shot.

If Lionsgate had asked Patina Miller to appear on daytime talk shows, late night talk shows, radio shows, podcasts, blogs, or a well-placed tweet promoting Mockingjay Part 2, mentioning that b-t-dubs, I'm going to be America's next President--tying the movie into the relevance of the current election season, then maybe "Mockingjay Part 2" would have been trending on its opening night.

And maybe more black women than solely me would have made seeing the movie a priority and shown up opening weekend.


3. Cast one identifiably Hispanic or Latin@ person anywhere in the film.

It's 2015. Hispanic and Latin@ audiences drive the domestic box office. How do you have no Hispanic or Latin@ representation in a movie set in North America and expect to have a robust domestic opening weekend?


4. Give Evan Ross a line. Or anything of significance to do, besides being another dead black man. Boggs already filled that quota, along with achieving Magical Negro status.