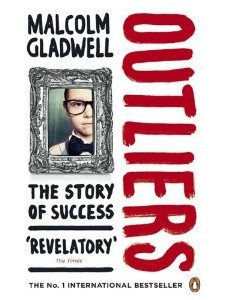 From the ninth chapter and the epilogue of Outliers by Malcolm Gladwell:


Outliers are those who have been given opportunities--and who have had the strength and presence of mind to seize them.

Bill Gates could accept the title of genius, and leave it at that. It takes no small degree of humility for him to look back on his life and say, "I was very lucky." And he was. The Mothers' Club of Lakeside Academy bought him a computer in 1968. It is impossible for a hockey player, or Bill Joy, or Robert Oppenheimer, or any other outlier for that matter, to look down from their lofty perch and say with truthfulness, "I did this, all by myself." Superstar lawyers and math whizzes and software entrepreneurs appear at first blush to lie outside ordinary experience. But they don't. They are products of history and community, of opportunity and legacy. Their success is not exceptional or mysterious. It is grounded in a web of advantages and inheritances, some deserved, some not, some earned, some just plain lucky--but all critical to making them who they are. The outlier, in the end, is not an outlier at all.

How can you seize your opportunities today to develop yourself into a successful outlier?