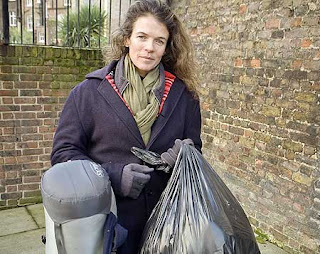 From an episode of Famous, Rich and Homeless on Planet Green:

(A police officer has declared that James and his equally homeless friend Drax are too "able" to qualify for a shelter because they have been homeless for so long. Meaning, if they had become homeless recently, they would be at a higher level of vulnerability, which would have qualified them for a shelter.)

Annabel Croft: Do not give up hope, James. We've done one step, yes?

Drax: If I take another step, I'll probably fall or something. (Laughter)

Annabel: Well, we have done one step.

Annabel narrating to the camera: It's an eye-opener, isn't it? It's frustrating. They're so beaten down by what they've come up against with all the brick walls that they really can't be bothered. And I can now see why they also sit around the street and get into a sozzled state so they can put all the pain behind them. It's one great big vicious circle.

I'd love to sit around in a sozzled state, repressing the pain of being beaten down by brick walls, my soul crushed by continual rejection. But my drive for success prevents me from doing so.